The World War II sacrifice of 20-year-old Air Force Staff Sergeant George Sneckus of Springfield was honored earlier this month with a visit by his niece Teresa (Sneckus) Gregoire to young George’s grave in the Ardennes American Cemetery in Neupre, Belgium.

Son of Lithuanian-born immigrants George and Petronnella (Nellie) Sneckus, George was shot down and killed on his first mission over Germany as a waist gunner on a 10-man B-17 bomber on May 24, 1944.  Fifty-seven years after George’s death, his niece Teresa, also of Springfield, made the first and only visit by a relative to the grave of the uncle who had died before Teresa was born. That was back in 2001.

Upon leaving her uncle’s grave, Teresa had mentally promised someday to return. And then earlier this May, all the pieces fell into place for her to do just that–this time, with her husband Ron and their sons Ryan, 35, and Nathan, 28.

“My sons are starting their own families, and so things were only going to get more complicated in terms of making this trip,” Teresa says of the trip’s timing. “I wanted my boys to have this experience when it would mean something to them—as opposed to when they were too young to remember–but while we could still honor George as a family,” she explains.

From May 9-19, the Gregoires visited a dozen military cemeteries in France and Belgium, as well as several war museums, Dunkirk, and Omaha and Utah Beaches in Normandy– as well as the nearby Saint-Lo Cemetery which was filmed in the movie, Saving Private Ryan.

Mother’s Day, Sunday May 13, was particularly poignant for Teresa as she walked among the thousands of white crosses at Saint-Lo. “I was walking among the graves with my boys, and then taps started to play on the hour, and I felt so happy, so grateful that my boys were here, above ground–unlike all the mothers who had to lose their sons.”

Yet as moving as that was, the highlight of Teresa’s family tour was their May 17 visit to the grave of Teresa’s uncle George. “We were all taken aback by the beauty of that particular cemetery, the rows of white crosses and the beautiful green grass,” Teresa recalls. “You can’t believe how beautiful it is–it gives you a sense of peace to see how beautiful everything is kept for all the boys who lost their lives, how well maintained those cemeteries are.” 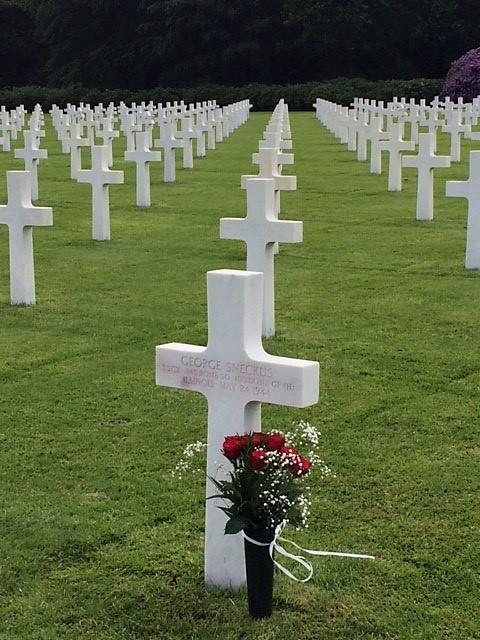 On her first visit to George’s Belgian grave, Teresa had brought and left soil from the backyard of his Springfield boyhood home.  On this visit, she says, “We brought and left behind, near George’s headstone, one of the shells from my dad’s 21-gun salute at his funeral at Camp Butler.

“We also brought dried roses from the spray on my dad’s casket and rubbed what oil was left in those into the letters on George’s cross,” Teresa explains. “Last, we brought a piece of my grandmother’s china and buried a small plate George use to eat from at the head of his grave. My boys kind of pushed it into the ground, and then we took the soil from where the plate had gone in to spread on my dad (George’s brother)’s grave back home.

“In a little ceremony, we said The Lord’s Prayer and sang ‘God Bless America.’ About that same time, the cemetery’s carillon played ‘God Bless America,'” and ‘America the “Beautiful,'” Teresa recalls.  (You can read more about Teresa’s quest to learn the true circumstances of George’s death in “Honoring an Uncle Lost in World War II,” Chapter 25 of my book, A Century of Lithuanians in Springfield, Illinois.) 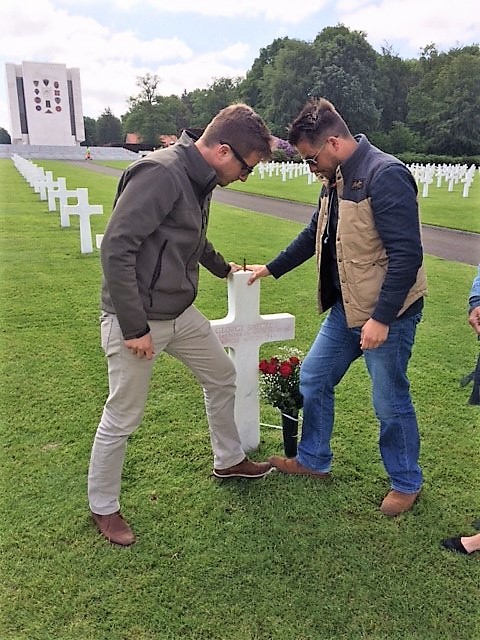 From left: Nathan and Ryan Gregoire pressing the plate into the ground near George’s headstone, May 17, 2018, Ardennes American Cemetery, Neupre, Belgium.

“George closely resembled my father Julius, who served as a staff sergeant in the Marines, fighting in the Pacific,” Teresa also wrote in Chapter 25. “I sometimes wondered if George had lived and grown older with my father, they would have shared their war stories with us.”

Remembering how much her grandmother Nellie suffered George’s loss, Teresa says she thinks of George’s sacrifice whenever she looks at an American flag. “To me, his sacrifice defines the meaning of patriotism. The memory of George and how he died is something my family will carry with us and honor for the rest of our lives.”

By bringing her sons on pilgrimage to George’s grave this month, Teresa also did the best she could to formally pass his memory down to the next generation for their safe-keeping.  “As we were leaving George’s grave, my son Ryan kind of leaned over and kissed the top of his cross, and then Nathan did the same thing, and we all did the same, kind of to say ‘Good-bye, George, and we’ll be back.’ ” 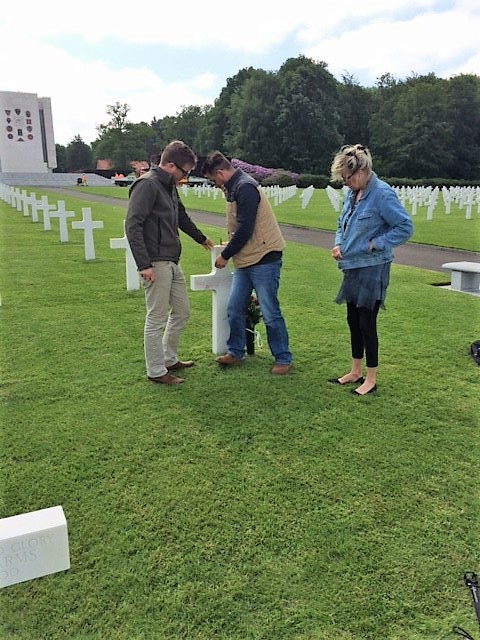 Saying “good-bye, until next time.”

All photos courtesy of Teresa Gregoire.

A Century of Lithuanians in Springfield, Illinois, can be purchased at Noonan’s Hardware store at 8th and North Grand Ave. in Springfield–or on Amazon.com