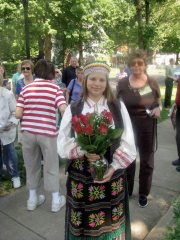 Kourtney Baker, a descendant of Joseph Andruskevitch, at the Lithuanians in Springfield marker dedication ceremony in 2012.

The Andruskevitch-Shoudis-Moser family started with Joseph Andruskevitch (probably Andruskevicius), who was born near Alytus, Lithuania in 1893 and immigrated to the U.S. in 1912.  Joseph was the second of three brothers, and he joined his brothers George and Simon who had preceded him to the coal mines of Sangamon County. The three worked together at the Peabody #59 mine in the Devereaux Heights neighborhood on Springfield’s north side.  Joseph was known “as Cucumber Joe” by his fellow miners.

In 1914, Joseph Andruskevitch married Anna Shoudis, one of 13 children of Lithuanian immigrants Adam and Eva Shoudis, who were married in 1895 in Grundy County and settled in South Wilmington near Joliet.  Joseph and Anna had four children, one who died in childhood.

Joseph left coal mining and in 1937 rented a farm near Cantrall.  Joseph and Anna later bought a farm in Pleasant Plains, where the family raised chickens and cows, and sold eggs and their own home-made cheese and butter.  Several Lithuanian-Americans in Springfield remember driving out to the farm to purchase these products. Donna Richardson Baker, Joseph and Anna’s great-granddaughter, remembers many holidays at the farm, and the milk cow, “Goldie.” She says that the farm was inherited by Joseph and Anna’s son, Eddie, and when he died in 2010, by his sons Michael and Edward “Paul.”

The family is proud that one of Joseph Andruskevitch’s nephews, Casimir Andruskevitch, born in 1911, who grew up in St. Vincent de Paul parish, in 1936 became one of three young men from the parish who were ordained priests.