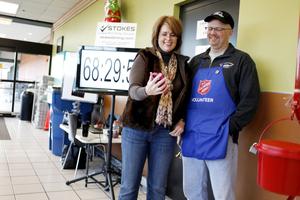 December, 2012–Every once in a while a Springfield Lithuanian-American comes out of nowhere to perform super-human feats of dedication and stamina, grab headlines–and make us proud. For the second year in a row, Darrell Tureskis, owner of Nyilas Cleaning Services, has won or tied the national record for Salvation Army continuous bell-ringing.

When Darrell put aside his bell and went home, he had been standing and ringing for 80 straight hours at the Schnuck’s Supermarket on Montvale Dr. in Springfield.

Like last year, I happened by and exchanged a few words with our sleep- and food-deprived hero after he’d already been on his feet for two days. Just like last year, Darrell managed a tired smile and friendly conversation. (None of which I expect he’ll remember tomorrow.) Luckily, his wife Angela was there.

When I saw him this evening with close friends and family members, who were standing by to support him through the final stretch and celebrate his accomplishment, Darrell had already been at it for almost 79 hours–already 19 hours longer than his 2011 performance. Amazing!

Like Dick Butkus and Charles Bronson, Darrell gives testament to that fact that some Lithuanian-Americans, at least, seem to be made of steel. Will his altruism, community-mindedness and pure physical endurance inaugurate a new sport–-the charity triathalon? Stay tuned.

One sad footnote: The Dec. 14, 2012 bell-ringing competition between Darrell and two other marathon ringers in other states was called to a close by mutual agreement due to the massacre at Sandy Hook Elementary School in Newtown, CT.