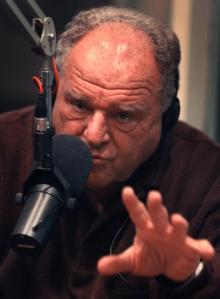 Sam Madonia DJ-ing at WFMB-A.M. Photo from Springfield’s Own magazine.

Sam Madonia is a long-time local radio personality on WFMB-AM, an ISU grad, Lincoln High School teacher for 31 years (including “Teacher of the Year,”)and Railsplitters’ head baseball coach from 1980-85, as well as public address voice of the Illinois State Fair since 1994–and a big Fair fan.

However, not everybody knows that Sam is also the son of a Lithuanian-American, the late Isabelle Simonavitch, who worked at City, Water Light and Power. Sam, his mother and late Sicilian-American father Sevet Madonia, an SJ-R employee and well-known Republican precinct committeeman, lived with the Simonaviches until Sam was 10.

Both grandfathers were coal miners, and his full name, Sam Charles Madonia, is a tribute to both men. Sam is also a proud Springfield Northender, having grown up on Fifth Street across from Lincoln Park.

He is the husband of Alice and father of grown-up daughters Stacey Dillilo of Las Vegas and Anne Hubbard of Springfield–and grandfather of Shea and Sloane Hubbard.

Sam is the oldest of three children. His sister, Jeanne, and her husband, Rich, still own the family house on Fifth Street. This information is from Springfield’s Own magazine, and you can read more about Sam at this link: