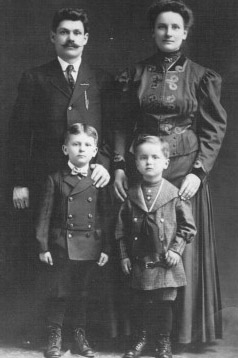 The Yamont (Jomantas) family in Springfield circa 1909. Mary Yamont (Marija Jomantiene) with her sons (l to r) Benny and Joseph.

The Baksys family in Springfield started with Marija (Baksyte) Jomantiene, who immigrated from rural Lithuania at the age of 18 in 1902. Born into a poor farm family that sent the majority of its children into mines and factories in the U.S., Marija was known as Mary Yamont to her neighbors and friends.  Marija was our dear “Teta” (Aunt) to six grand-nieces in Springfield.  Teta had three children:  Benny and Joseph Yamont and Mary Yamont Winosky.  There were no grandchildren.

Teta’s Lithuanian immigrant husband was a coal miner, but they divorced, and Mrs. Yamont lived afterwards with her children in a small, asphalt-shingled house on North Peoria Road, not far from the Illinois State Fairgrounds. In the early days, Peoria Road was unpaved and thick with mud.  There might also have been a streetcar line. One neighboring family on Peoria Road was the Klicknas.

Our Teta wanted to learn English all her life, but never had the opportunity.

Her son Joe talked of being considered “stupid” because he didn’t know any English when he started school. In later life, he often spoke of how hard life had been for immigrant families in Springfield.

We girls remember Teta always telling us, in very broken English, how pretty we were, and giving us milk and oatmeal raisin cookies. Together, we watched Lawrence Welk and other variety shows.  Teta had an old and thickened beagle mix named “Queenie” that didn’t have much interest in anyone else, but jumped and barked joyously whenever Teta returned from being out.

siblings l to r: Vincas and his wife Josephine, Joanna & her husband Antanas, Brunas and friend, Jonas and wife Grazina, circa 1950

Teta was the one who introduced her grand-nieces, Terry, Sandy, Cindy, Diane, Pam and Mary, to masses at St. Vincent de Paul Lithuanian Catholic Church. These masses were a sad occasion for Teta, commemorating her son Benny who had died, and often were followed by a trip to his gravesite and special lunches at the Ann Rutledge Pancake House on North Grand Ave., where we thought we had entered heaven with strawberry pancakes and whipped cream (not the kind of food one got at home!)

On the first Friday morning (“Children’s Day”) of the Illinois State Fair, our mother Josephine would take us to Teta’s to receive our $5 each spending money. Teta, Mary (Yamont) Winosky and Joe Yamont were our only relatives who always remembered our birthdays with cards and $5 or $10 in cash—our only real spending money as children.

Teta died in March 1978 at the age of 94 after living as an invalid for several years in the Hazel Dell Lane home of her daughter, Mary Winosky.

Mrs. Winosky, who died of breast cancer in 1986, is buried with her husband in Oak Ridge Cemetery, not far from the Illinois Vietnam Veterans’ Memorial.  Teta and her son Joe, who never married and died of a stroke in 1986, as well as Teta’s brother Paul, who contracted tuberculosis as a textile worker in Chicago and died at the age of 38, are all buried together in Oak Ridge.