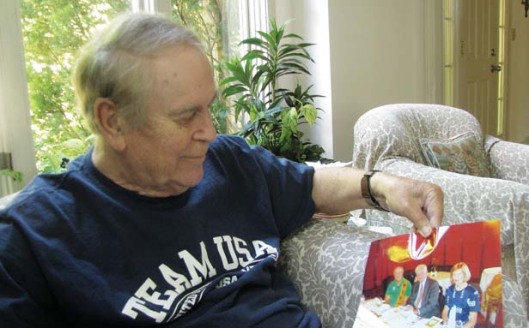 Benius “Ben” Zemaitis was born in Lithuanian and lived in a Displaced Persons camp in Germany after WWII. He graduated from the University of Illinois Chicago and became a CPA. After retiring in 1999, he returned to Lithuania to help train gover – William Furry photo.

Springfield Lithuanian families were highlighted in the article Lithuanians in Springfield by William Furry in the July 12, 2012 issue of the weekly Illinois Times. The article begins:

The placing of a church cornerstone is an act of faith. For the founders of Springfield’s St. Vincent de Paul Lithuanian Catholic Church it was an act of survival. Exiled from their tiny homeland on the Baltic Sea, they came to America at the turn of the last century seeking peace, opportunity and religious freedom on the city’s north side. The cornerstone for St. Vincent’s was set on March 4, 1908, and Springfield’s Lithuanian-American community thrived for the next 60 years.

Read the entire article at “Lithuanians in Springfield” at www.illinoistimes.com.