The book “We Thought We’d Be Back Soon” contains 18 oral histories of Lithuanians who became war refugees between 1940 and 1944. Next month, my review of “We Thought…” will be published in the English-language monthly, Draugas News.

To celebrate this wonderful book and to commemorate the 70th anniversary of the law that permitted “displaced persons” or “DP”s like my father Vince to immigrate to the U.S., I’m publishing this second in a series of blog posts based on the book. Images for these post were contributed by William Cellini, Jr. 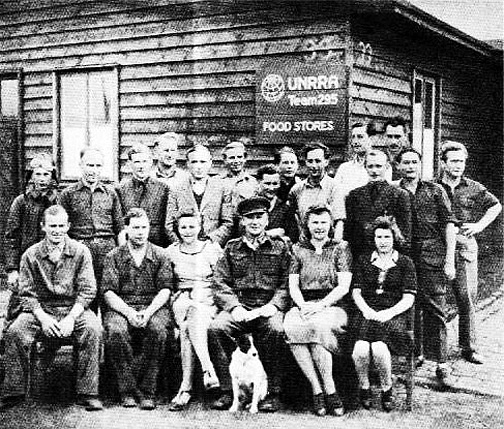 History in the Human Voice

By its accumulation of  human detail,  “We Thought We’d Be Back Soon” enhances anything the reader may already have believed or known about the flight of the Lithuanian “DP” generation during WW II. Almost without effort, the descendants of  “DP”s will find gaps in their own family stories filled.

It’s as if a veil between the generations has been lifted, and we can suddenly see our “DP” parents or grandparents as they were when they were young during a desperate time in a different world. We are there. And certain images and anecdotes, different for each reader, will linger long after the reading is over.

On the humorous side, we have an invading Nazi column that stops on the outskirts of a Lithuanian town in June 1941 so the soldiers can shine their shoes and shave before presenting themselves as occupiers.

And for the heart-wrenching, we have the story of the Lithuanian infant born into such want, with only a sheet to be swaddled in, that she dies on a train passing through Berlin in late  1944 and is buried by German strangers in between bombardments.

There is the Lithuanian railroad manager who refuses passage on one of Lithuania’s last departing, overcrowded trains to the wife and children of his Soviet-deported and executed co-worker–while filling two rail cars with his personal possessions.

There is hapless Juozas Taoras, the farmer, who in 1945 is forced to flee his first good job with servicemen in the American occupation zone to escape arrest as a Nazi sympathizer–simply because he has dared equate Stalin with Hitler.

Personally, I will never forget the brave grocery shop girl who’s exiled to Siberia in 1941 after she dares tell the wives of two occupying Russian officers not to butt in line because there was plenty of food in Lithuania before the Soviets emptied store shelves.

And, there is one unforgettable anecdote about the Red Army’s campaign of rape in conquered Germany. In it, a desperate Lithuanian “DP” mother protects herself and two young girls by screaming in broken Russian that she is not German but Lithuanian–and can’t wait to go home now that Lithuania is Soviet-“liberated.”

Falling Back with Germans—or Nazis?

As a fractal of the bigger “Why leave Lithuania” question, the modern American reader, perhaps attaching guilt-by-association to Lithuanians falling back on the same roads, trains, and ships as Nazi forces, might wonder, “Why flee into German lands?” The answers here are often not explicit because of the obvious duality of the dilemma of Lithuanians caught between Stalin and Hitler.

However, bookkeeper Brone Parbaciene, whose husband has been tortured and mutilated to death by the NKVD at Rainiai Forest, lays it out straight: “I had already suffered at the hands of the Russians, so I fled to the other side, which took us in.”

A Range of German Experiences

We have callous Nazi-loving estate owners who force Lithuanians to work for insufficient food and sleep with their children in filthy pigsties. We have soldiers who shoot hungry refugees whose only crime was to enter abandoned Konigsberg / Karalauciaus homes from which German farmers have fled. But we also have small German farmers, soldiers, bureaucrats, and midwives who help to feed, clothe, and shelter a flood of anti-Soviet refugees amid the shared hardships of war.

One Lithuanian mother gratefully remembers how her toddler received an egg every day, despite German food shortages. Another mother is efficiently delivered of her placenta, post-childbirth on the open road, by a German Army doctor in retreat with his unit who refuses any payment. German police who initially insist penniless refugees pay their own train fares to an interrogation point proceed to lend them the cash to do so—which the refugees conscientiously repay.

The Survival Advantages of Language

Over and again, German culture and language proficiency permits Lithuanian professionals and intellectuals to bargain for what they need from harried authorities and locate and take refuge with friends and relatives already living in “German lands” (meaning Konigsberg and occupied Poland as well as Germany, itself).

However, the helpful German connections possessed by urban Lithuanians who have higher education or have worked in interwar German-owned businesses–or for example, under Lithuania’s German occupation railroad authority–are lacking among rural Lithuanian refugees—with negative results.  Not understanding or speaking German, perhaps my farm father and his brothers didn’t even know they were being inducted until they were spirited by train to Innsbruck, Austria, in December 1944 for basic training. (Christmas always seemed difficult for Dad because he I think he remembered doing push-ups interminably in the bitter cold on Christmas morning 1944 because several other inductees had disobeyed their German officers and refused to fall out.)

Even if Dad and his brothers had understood they were being inducted, perhaps it was no different from when they had all been taken against their wills in Lithuania to dig German trenches and foxholes, later escaping under fire. Once these young men had lost everything and become refugees, perhaps they felt they had to bow to the unknown purpose Germany had for them as the price for their escape from a known and far worse Soviet fate.

By no means could men who had been limited to their farm and village world have taken advantage of professional or extended family connections already living in Germany.  Nor did they have an alternative trade or profession in war-time short supply. (Lithuanian doctors like Juozas Meskauskas and Janina Jakseviciene were immediately put to work in understaffed civilian hospitals and clinics.)

In fact, subsistence Lithuanian farmers like my father experienced unique trauma in their flight from homesteads whose improvement had been the work of their entire lives—the land and its cycles, their entire world. For these rural refugees, the reality of all they were leaving hit hardest at being relieved, as soon as they crossed Lithuania’s western border, of their wagons and horses. (Often, milk cows had already been left behind on the road because they couldn’t keep pace with horses).

Farmer Taoras tells how, before leaving for a point further from the front, he and his wife go to see the horses they were forced to sell the day before to the German Army:

“(At first) when we fled, we weren’t sorry for anything, just to get away faster,” he recalls. But as the couple approaches their horses, the animals see and recognize them. Having gone unfed and tied to a rail all day and night, the horses begin neighing and pawing expectantly, hoping that their longtime owners will feed them.

Helplessly, Taoras recalls, “We came up and stroked them…and both my wife and I began to cry because they had pulled so faithfully, they had pulled so much that they were now skin and bones…It was an abandonment. Our last asset was the horses.”

Coming Next:  Part III of “We Thought We’d Be Back Soon.”  Read how Lithuanian refugees established “Little Lithuanias” in their postwar “DP” Camps and then started all over again in America.