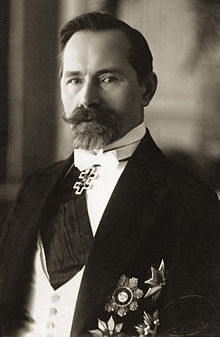 Antanas Smetona, President of Lithuania 1919-1920 and 1926-1940, Wikipedia. Photo owned by the National Museum of Lithuania. http://creativecommons.or/licenses/by-sa-4.0/

Due to its large Lithuanian population, Springfield has played host to two Lithuanian presidents over the years: to be exact, one president-in-exile and one president-to-be. The first man was the most important leader of Lithuania’s inter-war period of independence.  The second was a World War II exile who returned to lead Lithuania through the trials and triumphs of its early post-Soviet years.

On May 3, 1941, Lithuanian President Antanas Smetona became the first foreign president ever to visit Springfield, according to the Illinois State Journal. A life-long patriot who had worked for and signed the 1918 Act of Independence of the new Lithuanian republic following World War I, Smetona became Lithuania’s first president in 1919 and subsequently, its longest-serving leader. He visited Springfield as a president-in-exile following the Soviet invasion and illegal  annexation of Lithuania in the summer of 1940.

According to the newspaper, an official delegation including Springfield’s mayor met Smetona’s train from Chicago at the depot, and police led his motorcade to the Illinois Capitol. (So the public could line the streets, the route of the motorcade was printed in advance in the newspaper: west on Jefferson, south on Fifth St. and then west on Capitol Ave.) The official welcoming delegation included Fr. Stanley Yunker (Junkeris), of St. Vincent de Paul Lithuanian Catholic Church, and William Yates (Yacubasky), chair of the Sangamon County Republican Central Committee. Several local women also helped arrange the visit and welcome the president: Mrs. Verona Welch (Wilcauskas), Mrs. Bertha (Yacubasky) Adams (Adomaitis), and Mrs. Julia (Gedman) Lukitis.

One newspaper report said Smetona proceeded to have an informal meeting at the Executive Mansion with Gov. Dwight Green. Other reports said he was met at the depot and introduced at a luncheon at the Leland Hotel (sponsored by Springfield’s Mid-Day Club) by (acting governor) Lt. Gov. Hugh Cross, who likened the Lithuanian president to Abraham Lincoln and noted his achievement in establishing compulsory education and widely extending literacy.

Prior to his speech in English and Lithuanian, Smetona was honored by the singing of the Lithuanian national hymn by St. Vincent de Paul’s choir (in costume) and the playing of the anthem and folk songs by George W. Killius on violin. Members of the choir that day included: Bernice Bernotas, Agnes Bakunas, Genevieve Bugaveski, Frances Petrovich, Bernice Kurila, C. Turasky, Petronella Shimla, Ann Zintelis, Virginia Shadis, Bernice Rautis, Mary A. Shimkus, and Antocie (sp?) Zipnis.

Following lunch, the Lithuanian president toured the Lincoln tomb, where he was greeted by other Lithuanian-Americans, and Lake Springfield, where he stopped at the home of Saddle Club owner Joseph Welch (Wilcauskas). Before returning to Chicago by train, Smetona was also feted at public reception at the Leland Hotel. 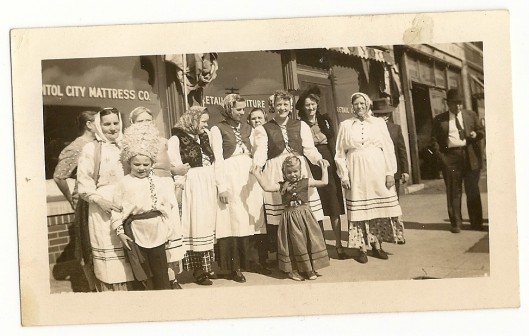 When I heard that local Lithuanians lined the streets to see President Smetona’s motorcade, and saw the dirndl dresses worn by the choir at Smetona’s luncheon, I wondered if this photo, owned by Rick Dunham, could have come from that day…? (Note the boy in Cossack hat.)

The State Journal reported that President Smetona’s luncheon address detailed the brutality being suffered by the people of Lithuania at the hands of the Soviet Union, pleading for the return of justice and freedom to his homeland. For more information about the remarkable life and career of Antanas Smetona, please see: http://en.wikipedia.org/wiki/Antanas_Smetona

Fifty-six years and a long Soviet occupation later, Springfield was visited by Valdas V. Adamkus, a Lithuanian-born émigré who had risen to power inside the U.S. Environmental Protection Agency (EPA) in Chicago. Adamkus visited here on March 27, 1997 to give a talk at the University of Illinois at Springfield sponsored by the EPA’s International Division. He was in the process of retiring from the EPA and moving back to Lithuania, after re-establishing his citizenship there in 1992. Adamkus also likely was already in the process of raising $1.25 million, with the help of Chicago friends, for his successful run for the Lithuanian presidency in 1998.

Members of the local Lithuanian-American Club, some of whom knew Adamkus personally (Ben & Vita Zemaitis), attended his March 27 talk and I believe, met him for dinner or a reception. Perhaps there was even a local fundraising event. Those photographed with Adamkus that day included: Romualda (Sidlauskas) Capranica, Rita Kupris, Vita Zemaitis, and Barbara Endzelis.

President Adamkus went on to lead Lithuania from 1998 to 2003, and then from 2004 to 2009, critical years for the country’s admission to the European Union and NATO, and its modernization and re-integration into the democratic world order. For more information about Valdas Adamkus, Lithuania’s émigré president, who was also the longest-serving senior executive of the U.S. EPA and largely responsible for the clean-up of the U.S. Great Lakes, please see: http://en.wikipedia.org/wiki/Valdas_Adamkus

Footnotes: In 1998, while I was working in Miami at a PR agency, I noticed a mistake on the front page of the Wall Street Journal. I promptly contacted the writer of the article to inform him that the Valdas Adamkus who had been cited for mysteriously or perhaps frivolously deciding to renounce his American citizenship had done so to become president of another nation: Lithuania.

In 2005, while visiting relatives, I was shown the Lithuanian Presidential Palace in Vilnius. It was interesting for me, while so far away from home, to think of the fellow Lithuanian-American residing there.