Lithuanian-Americans have contributed their share of Springfield sports heroes and athletic “greats.” Names like Rudis, Blazis, Banaitis, Wisnosky, Gurski, Darran, Gvazdinskas, Bestudik and Alane have graced the columns of our local sports pages over the years. However, even in this company, the Urbanckas name stands out.

Al (Alfred) Urbanckas, Jr., who later became a Springfield dentist, played basketball for Cathedral Boys High School, becoming the first Cathedral athlete to lead the City Tournament in scoring the same year (1954) that he won the state high jump title. Dr. Al was all-city in basketball in both 1953 and 1954. Later, he set the Big Ten high-jump record on behalf of the University of Illinois (6-8 & 3/4 inches) that stood 1954-64, and in 1957 won the high jump in the Big Ten outdoor and indoor track & field conferences. 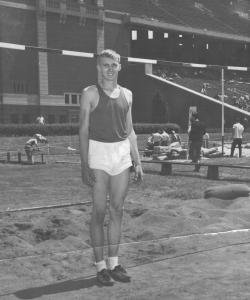 After he also tied for first place in the NCAA high jump competition that same year, Dr. Al was named Midwest track athlete of the year (1957) by Coach and Athlete magazine. His jumps routinely boosted U of I’s rankings at Big Ten track and field events throughout his college career.

Dr. Al’s uncle Peter Urbanckas, Springfield High School Class of 1934, played SHS basketball and football (as offensive and defensive left tackle). Known as the “Bone Crusher” on the gridiron, Peter later helped bring Golden Gloves (boxing) to the Illinois State Armory in Springfield, and still later was known as “Pistol Pete” for recruiting thousands of new members for Springfield’s YMCA 1968-94. He was inducted into Springfield’s Sports Hall of Fame (as a “Friend of Sport”) at age 85 in 2000, nine years after the induction of his nephew, Dr. Al.

Not to be outdone, Debbie Urbanckas (Jemison), daughter of Dr. Al and Peter’s great niece, was inducted into Springfield’s Sports Hall of Fame in 2014 for her outstanding career in Sacred Heart Academy and University of Missouri (Columbia) volleyball.

Debbie graduated from SHA in 1981 after being named to “All City Volleyball” in 1979 and 1980. At UM, Debbie was a starting outside hitter for four years and captain of the team during her junior and senior years. She set the university’s record for service aces in a four-game match, and held the record for kills –23 in one match—for five years. Debbie even made the final cut for the U.S. Junior Olympic Team.

One more Urbanckas, Dr. Al’s father and Peter’s brother Al, Sr., completed four decades of “chain gang” service at high school football games in Memorial Stadium at age 86 in 1997, along with his Lithuanian-American friend Peter Kurila. Al, Sr. had played football for SHS and was a member of the class of 1928.

Inducted in 1993, Mary (Rudis) Bestudik was a multi-talented athlete (basketball, baseball, diving, bowling) who played women’s basketball at the regional and national level, and captained the 1934 AAU All-American basketball team. Nine years later, she teamed with Marge Tapocik to win the scratch and handicap doubles titles in the women’s city bowling tournament. An early champion of women’s sports, in 1948 Mary also chaperoned away games for the “Springfield Sallies” AAGPBL team (Remember the film, “A League of Their Own?).

Mary was the wife of Sports Hall of Fame member Joe Bestudik (2003),  a U.S. Navy veteran of World War II who was drafted by the Brooklyn Dodgers baseball team prior to the war. He played for several teams in the American League after the war, as well.

Here are some other notable Lithuanian-American sports men and women:

Matt Banaitis was a baseball catcher and winning quarterback (2014) for the Chatham Glenwood Titans.

Dianne (Darran) Warren was the first Southeast High School swimmer to go to state in 1978. Swimming for Southeast in a city meet, her younger sister Kristen broke the record for the 500-meter freestyle that’s still on the board at Eisenhower Pool. She also went to state in the 200 and 500 freestyle, placing fourth in the 500. 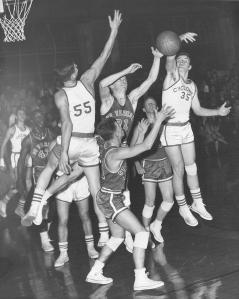 Dianne and Kristen’s dad Bud Darran, as president of Anchor Boat Club, spearheaded a Sports Night each year that featured a whole series of pro athlete speakers, including Coach Mike Ditka of the Chicago Bears. Bud also served as a high school swim “starter” for 37 years.

Dick Alane was a triple threat on the Griffin High School baseball, basketball and football teams.

From age 68 to 88, George Rackauskas was a committed volunteer organizer for The State Farm (LPGA) Classic at The Rail Golf Course (1980-2000).

2 thoughts on “Our Sports Hall of Fame”