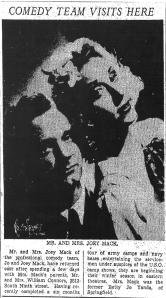 I write a lot about coal miners on this blog, but perhaps the most famous Lithuanian-American in Springfield in the 1940s was in show business: Joey Yanaitis (Janaitis or Jonaitis) Mack. Famous in Boston, Rockford, Cleveland, Augusta, Ga., and dozens of places in between, from the late 1930s through the 1940s, Joey was the male half of the traveling married vaudeville dance team of Betty Jo (Yanda Connors) and Joey Mack (billed as Jo and Joey Mack).

Joey and his wife Betty Jo made a significant contribution to entertainment in Springfield back when civic groups routinely put on amateur dance programs with sketches and costumes based on vaudeville and the silver screen.

In 1945, as their USO and vaudeville careers were winding down, Betty Jo gave birth to the couple’s son, Jerry. The family settled in Betty Jo’s hometown, Springfield, and Jo and Joey opened the Mack Professional School of Dance, first in the old Kerasotes Building downtown–where the school of Betty Jo’s instructor, Mildred Caskey, was located—then at Spring St. and South Grand Ave.

I visited the Mack dance studio on South Grand Ave. with my mother in 1966, just two years before it closed in 1968. Mary Judith Kraus, my own wonderful dance instructor who taught me on scholarship for 7 years, was one of several Springfield-area dance teachers who first studied or taught at the Mack school, including Jan Regan Burghart of Jan’s Dance Studio in Chatham.

Adopted into the Mack Brothers

Joey’s obit from 1995 reports that he was born in 1909 in Amsterdam, NY of Lithuanian immigrant Anthony Yanaitis and Sally (Snow) Yanaitis. His early days are shrouded in mystery, though Joey reported in a 1981 news story that he was 13 in upstate New York when Bobby Mack and his son Harold “took him in and gave him their name.” It’s unclear exactly when, but Joey joined a comedy and acrobatic vaudeville act called The Mack Brothers, and proceeded to perform not just at New York City’s biggest live-entertainment theatres, the Paramount, Palace, Hippodrome and Capitol, but also in London, France, Italy and Germany.

His 1981 newspaper interview reports that in his heyday, Joey shared stage billings with Judy Garland, Jack Benny, Chico Marx, Bette Davis, Buster Keaton, and Johnny Weismuller, among other leading lights known mainly on the vaudeville stage, not from movies. Joey even reportedly appeared in a dance routine in a movie called “Three Sailors on a Holiday.”

Other clippings I found in my research hinted at a gig with Alvin Feig as part of a Cleveland, Ohio “song and dance team” that included a jazz band—and before that, a stint with Wesley Barry’s “movie and stage act.” The fact that Joey played the violin, sometimes on the floor of the Illinois Senate in his last stint as the Senate’s sergeant-at-arms, and that his obit states he was a long-time member of the American Federation of Musicians, seems to support the Cleveland connection.

One of my most interesting finds was a clipping referring to an International Amateur Boxing Tournament at the Chicago Stadium in Rockford in 1929, where a Joey Mack of NY defeated Ray Trumblie in a four-round middleweight bout by judges’ decision. All of this points to a fluid career for a “hoofer” with both musical and athletic gifts, and maybe not much education, from the Roaring ‘20s through the Great Depression, when survival, itself, for the son of an impoverished immigrant, was an entrepreneurial–if not an acrobatic–exercise.

In the days when running away to the circus was a real phenomenon, it’s possible that Joey Yanaitis was already tumbling/playing music/boxing/acting by the age of 13, when he met the Macks.

Even a brief background in boxing would have given Joey something in common with his future wife, Betty Jo Yanda Connors, a professional dancer (“chorus girl”) he met when they were both traveling separately on the vaudeville circuit in 1939. Betty Jo was the step-granddaughter of famous Springfield featherweight fighter, boxing promoter and Empire Hotel and Theatre owner Johnny Connors of North Fifth Street. (The architecturally interesting Connors house in Enos Park is currently being rehabbed after a fire in 2013).

Joey Mack and Betty Jo Connors also had something else in common. Joey’s mother, whose re-married last name was Punibajas (sp?), ended up living in Springfield, Betty Jo’s hometown (though I’m unsure if that was before or after Joey and Betty Jo married).

Billed as “novelty entertainers,” a “madcap dance team,” “comedy knockabout dancers,” and “knockabout funsters,” Jo and Joey combined Betty Jo’s refined dance skills–some of them acquired at the famous Martha Graham school in New York–with Joey’s vaudevillian comedy acrobatics and pantomime. In the typical live-theater vaudeville style, their touring act often followed a “warm-up” burlesque show–exotic ladies of all descriptions. After the burlesque was over, band and singing acts and other comedy and dance routines like Jo and Joey Mack’s closed out the evening.

One description of their act is that Betty Jo would dance and Joey would “fall down a lot.” Another clipping refers to Joey’s hilarious pantomime of a woman getting dressed in the morning. Joey considered his comic impressions and mannerisms a core component of his tradecraft. Unfortunately, none of us will ever see any of Jo and Joey’s storied routines. It’s more regrettable, still, that not a single glossy publicity photo of Joey or his wife survive in the Sangamon Valley Collection to grace this blog. 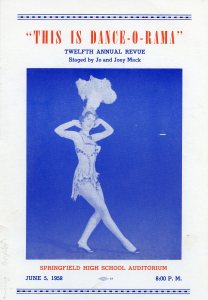 At the peak of their Springfield careers in 1956, “Mack Enterprises” included Springfield, Taylorville, and Southern View dance studios, a dance accessory store and a costume manufacturing business, as well as a professional troupe of actors and dancers. While running their dance school, Betty Jo also worked as a women’s physical education instructor at Springfield College, Joey made and repaired violins and wrote comedy scripts for old show business friends, and the couple occasionally performed a traveling act that included their young son, Jerry. I can’t imagine juggling that much, but Jo and Joey were from a different time, and they were nothing if not “fleet of feet.”

Thanks to Chuck Tisckos of St. Charles, MO, for inspiring and helping with this post. To read more about Jo and Joey Mack in Springfield, some of their famous local students, and how dance-entertainment culture evolved here through the early TV age, please look for my next post.