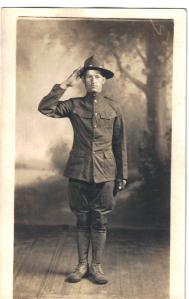 I recently met with Debbie, Richard and Nancy Kaylor of Riverton to hear stories and see photos of their deceased Lithuanian immigrant grandfather and proud veteran John Joseph Straukas. Several of the most striking photos of John Joseph, born in 1890 in Plunge, Lithuania, relate to his service in U.S. Army Company F, Fifth Battalion, 22nd Engineers, in World War I.

It’s been 100 years since the beginning of that so-called “War to End All Wars,” with its mass casualties and horrific trench warfare–not to mention history’s most prolific use, ever, of chemical weapons. According to Chris McDonald, Ph.D., an author and political science professor at Lincoln Land Community College, World War I cost the lives of 132 Springfield-area men, 11 percent of the total inducted. (See Chris’s book at: http://www.amazon.com/Three-Lying-Four-Sitting-Letters/dp/193613201X/ref=sr_1_1?s=books&ie=UTF8&qid=1432063137&sr=1-1&keywords=chris+mcdonald ). 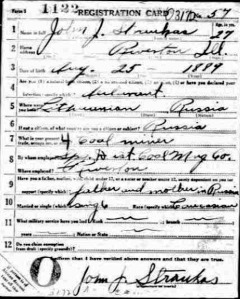 In 30 percent of those deaths, no cause was ever given. Almost 29 percent of the casualties resulted from the 1918 Spanish flu pandemic that swept the globe like a modern bubonic plague. Healthy, young American soldiers who contracted that flu in their training camps and on troop ships never even made it to the war, as their lungs filled up in just 48-72 hours. Concluding McDonald’s numbers: Just over 16.5 percent of local casualties were killed in action, and another 15.5 percent died of wounds received in battle. Nine percent of casualties were listed as “other,” probably non-combat. 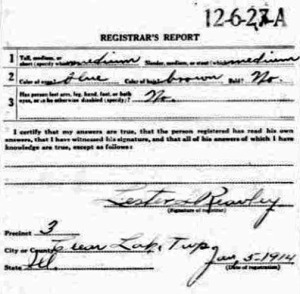 A coal miner and skilled carpenter, John Joseph sailed to New York from Liverpool in 1909 on the SS Baltic (reportedly stoking the coal-fired ship’s engines along the way, to pay for his passage). He was living with his aunt Lulu Grigiski (later Riverton’s most famous moonshiner), at the time of his induction. John Joseph and his brother had left Lithuania when it was part of the Russian Empire to avoid 25-year conscription by the Czar. Ironically, just nine years later, he found himself drafted into the U.S. Army, entering service in June 1918, only five months before Armistice. 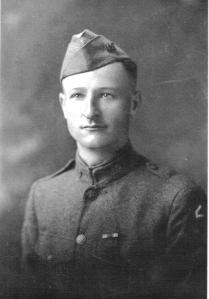 John Joseph trained at Ft. Benjamin Harrison, Indiana, and sailed to Europe on September 15, 1918. He saw action in the Meuse-Argonne offensive right at the time of Armistice in November 1918, and performed so heroically in combat that he was offered, and rejected, a promotion to corporal. He was granted U.S. citizenship in 1918, and discharged honorably in July 1919 at Camp Grant, Illinois. Years later, John Joseph, who avoided drink, used to huddle at the end of the bar at Butcher Tavern, discussing war experiences with the owner, another World War I veteran.

John Joseph lived a notable life in other ways. According to his Kaylor grandchildren, he could fix or build anything, including his own Riverton home, and was always ahead of his time, for example, digging his basement by the scoop and shovel method, and installing Greenfield wiring. He made all the cabinets and woodwork in the house. John Joseph also always proudly kept a “running” car to take not just himself, but also other miners to and from work in the nearby Denkert Coal Mine. Perhaps the original “designated driver,” John Joseph also used the car to make sure his drinking friends got home safely from any and all of Riverton’s nine taverns. 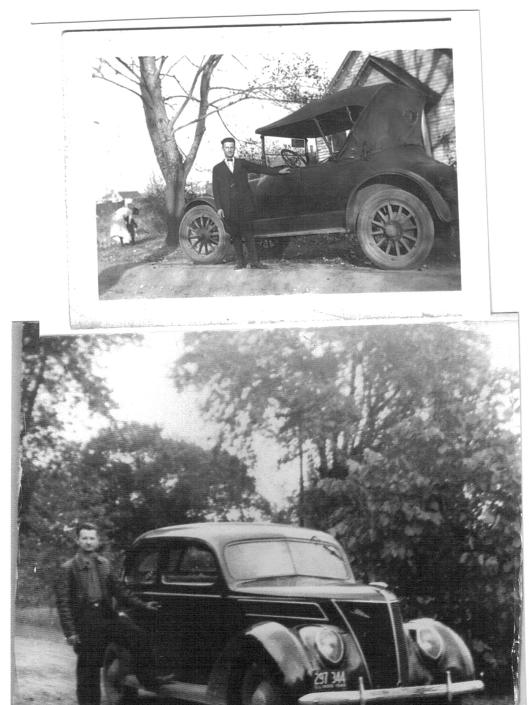 Top: John Joseph with Model T on his wedding day in Riverton, 1925. Bottom: In leather jacket with 1940s vehicle

John Joseph was married to Esther May Trow (13 years his junior) after a very short acquaintance in 1925. The couple had two daughters: Dorothy Jane, who married Richard Dean Kaylor, and Louise, who married James Whitaker. The Kaylor grandchildren, who mostly grew up on Esther and John Joseph’s Riverton farm, are: Deborah, Richard, Denise, Nancy, Sharon, John, and Tammy.

The Straukas grandparents always kept two gardens: one closer to the house with lettuce, tomatoes, radishes, onions, carrots, and a chicken coop, and a more distant garden with red and sweet potatoes, peas, corn and green beans. After harvest, potatoes were stored in bins in the basement. The kaylor kids remember eating such ethnic foods as pickled pigs’ feet, herring, and “stinky cheese.” Chickens were slaughtered outside and cleaned in the basement.

Dedicated to the memory of all the Central Illinois men who served in World War I.