(Editor’s Note: This is third and last in a series of Lithuanian grocery family profiles. All can be found in the expanded 2016 edition of my book, “A Century of Lithuanians in Springfield,” now for sale on amazon.com and at Noonan’s Hardware on N. Grand Ave.)

Joseph Yucus, Sr., [Juozapas Jučas or Jocius] emigrated to the U.S. from Lithuania around 1898 and moved to Du Bois, Penn., where he found work as a coal miner. According to U.S. Census information, he lived in Sandy Township near the Eriton bituminous coalmine and by 1909, the mine loaded 2,600 tons of coal annually and employed about 526 men and boys. While in Sandy Township, he likely met fellow Lithuanian immigrant, Sara ‘Sadie’ Tomkevich [Tamkevičius]. They married and had three children live to adulthood; Anthony or Tony (1902-1941); Joseph, Jr., (1906-1973) and Mary (1909-1934).

In 1910, the family moved from the Keystone State to the Land of Lincoln and by 1913, Joseph, Sr., was operating a tavern on Peoria Road near Elizabeth Street while Sadie’s brother-in-law, Charles Rumbutis (he married Sadie’s sister Helen), was operating a tavern in downtown Springfield, according to the Springfield City Directory of 1912. The Yucus family lived on Springfield’s North End in the Devereux Heights neighborhood with its mix of Italians, Spanish, Slovaks and fellow Lithuanians.

When Springfield citizens voted the town dry following a 1917 referendum, all tavern business was halted, although many owners re-applied for “soft drink licenses” to keep their establishments running. In certain cases, liquor sales still continued at great legal risk to the tavern owner and to the patron. There is no indication, however, that Joseph, Sr., covertly sold alcohol—to the contrary, he complied with an earlier ‘lid’ law, whereby taverns were ordered to close doors at midnight and cease operations on Sunday. In one instance, club-wielding Lithuanian miners became enraged after Yucus shut his doors at midnight. They attacked the tavern, wreaking havoc by breaking windows and hurling a brick through the front window that, “narrowly missed injuring Yucus’ wife [Sadie],” per the account in the Illinois State Journal.For Joseph, Sr., the attack was the last straw. He left the tavern business and went back to being a miner, finding work at the Devereux mine near his home.

Misfortune struck the family in 1920 when Joseph, Sr., died from heart failure–leaving behind his 37 year-old wife and three children. Sadie found support for herself and her family by re-marrying to Charles Cook (Kutkevicius), a Lithuanian immigrant who ran a grocery store on Springfield’s North End. Tony was the eldest Yucus son and he was still at home with his two siblings, but old enough to have a paying job as a deliveryman for an ice company. He also worked at the International Shoe Company on North 11th Street and with his brother Joe, Jr., at the Cook & Yucus grocery with their stepfather, Charles.

Tony realized if he wanted to avoid the coal mines, he needed to create his own business. By 1926, he was operating his own grocery at Sangamon Avenue and North 17th Street. According to public records, that North 17th Street store (built in 1913) and the attached family home had a history of Lithuanian ownership back to at least 1909. Joseph and Helen Mankevich (Mankevičius) owned the residence just prior to Tony–they also owned the grocery at 1700 Sangamon Ave. that Tony purchased. 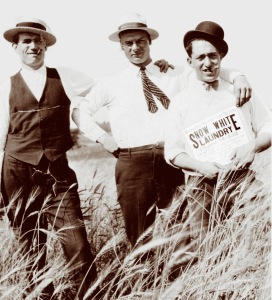 Tony was a hard worker, as were all the Yucus clan, thanks to their determination to succeed. In 1927, according to the Journal, Tony incorporated the Snow White Laundry with Charles Stevens and Eli Cellini, an Italian who moved to Springfield in 1923 with his parents and siblings.*

They built a facility in the 1700 block of Peoria Road, and the business even had its own baseball team, “The Snow White Laundry Nine,” which competed against Paris Cleaners and other businesses in town. Into their 13th straight win, Snow White was pitted against the “Lithuanian Alliance Club” of Salisbury, Ill, according to the Aug. 18, 1929 Illinois State Journal. Newspaper reports also show Tony’s grocery had a team, “The Yucus Nine,” that played in the same league, termed “semipro” by Springfield newspapers.

The Snow White Laundry was ultimately sold and it became “The New Snow White Laundry” under the management of Joe Yucus, Jr. In addition, Joe transformed an old garage next to the laundry into a “beer and lunch tavern” he called “The Mecca.” Joe, Jr., later sold the tavern to the Corcoran family, whose daughter Jean married Leonard Naumovich, another Lithuanian-American from the North End.

Meanwhile, Tony Yucus continued with his grocery at 17th and Sangamon, and to make extra money, he rented a portion of his building to boarders. He married Margaret Catherine Yuronis, the daughter of Lithuanian immigrants Michael Yuronis (Juronis) and Katerine Kriscunas (Krisciunas). Tony and Margaret had two children, Kenny Joe and Patricia, and lived in a house next to the family grocery.

In the 1930s, Tony’s store became a “Clover Farm Grocery” via an out-of-state corporate franchise. Clover Farm had stores in the Northeast, South and Midwest. Under the franchise, local distributors supplied owners like Tony, selling them goods at lower prices compared to independent family groceries without access to bulk purchasing. Clover Farm corporate provided assistance with merchandising and record-keeping, too.

According to the 1931 Springfield City Directory, in addition to Tony’s store, three more Lithuanian-American owned groceries were Clover-branded: the Victor Bozis Grocery, the Peter Urbis Grocery and Cook & Yucus. With the end of federal alcohol Prohibition in 1933, Tony’s store re-introduced beer, as did many other stores and licensed “soft drink parlors.”

It was in this euphoric post-Prohibition period that Mary Yucus wed John Blazis, the son of Kasia and Andrew “Matt” Blazis (Blažys or Blažaitis) in 1933. John Blazis had worked as a clerk and a manager Cook & Yucus grocery, so it is assumed Sadie’s daughter met John while he was working there. The marriage came to a tragic end when Mary died at the young age of twenty-five in 1934. Adding to the family’s pain, John Blazis then sued his former mother-in-law Sadie over the ownership rights to a property on Peoria Road titled in Mary’s name but purchased by Sadie.

The case went to the Illinois Supreme Court, which they ruled in Sadie’s favor. According to the April 9, 1937 Journal, Blazis also tried to sue Sadie for back-wages owed him from when he quit his job in a coal mine to go and work at the grocery. John Blazis’ lawsuits open a window into the opportunity costs of working in family businesses that often paid small salaries to family workers while pouring most of their gains back into the business or into real estate investments. It is plausible John found himself pushed out of the family business once his marriage connection to Mary was severed by her death. The outcome of Blazis’ back-pay suit was not published and his subsequent whereabouts are not known.

In 1941 tragedy again struck the Yucus family when Tony died at the age of thirty-nine following a long illness. Tony’s wife Margaret continued the grocery, but in 1952 she sold it to Andrew Tapocik, a son of Slovak immigrants who lived in the neighborhood. He re-named the establishment “Tapocik’s Grocery,” and it became a fixture on Sangamon Avenue until its closure in the early 1970s.

In 1947, Sadie (Yucus) Cook, the matriarch of the Yucus family, passed away. Joe, Jr., closed his New Snow White Laundry shortly after WWII, likely due to labor shortages during the war, evidenced by staffing vacancies seen in Springfield newspapers of the era. Around the time of its closure, Joe, Jr., and his wife (the former Miss Ina Dalby) moved out of the North End to be closer to Lake Springfield. Joe was an avid fisherman, boater and a long-time member-officer of the Springfield Yacht Club. He died in 1973 at the age of 67.

*Eli Cellini was born in Scanno, Italy. Unable to work in the mines due to a paralyzing accident from his youth, he worked in Springfield as a barber. He was the author’s great-uncle.