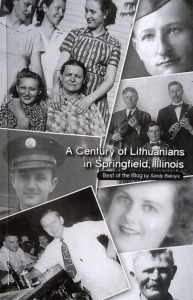 This week I found out what it was like to be an author on a “mini book tour.” On Thursday, A Century of Lithuanians in Springfield, Illinois, was reviewed in the Illinois Times.  Click here to read the review: http://illinoistimes.com/article-16383-from-lithuania-to-the-land-of-lincoln.html

Then on Thursday night, thanks to a gracious invitation from my reviewer, writer and professor emeritus Jaqueline Jackson, I also participated with two other authors in a book presentation and signing event at First Presbyterian Church.

Two days earlier, on Tuesday, Nov. 10,  I gave a 40-minute luncheon presentation about the book to almost 60 people at the Sangamo Club, including Augie and Ann Wisnosky, Diane Urbanckas and Debbie (Urbanckas) Jemison, and Mike Lelys and his mother Helgi. Laimutis Nargelenas was also in attendance, along with Barb Dirksen, Trish Quintenz and Rip Yaskinski, Jerry Stasukinas, and Rick Dunham from our Lithuanian-American Club.

The Sangamo Club Literary Circle coordinator told me that ours was the biggest crowd in at least several years!

We  were also joined at the Sangamo Club by proud Lithuanian-Americans Judy Jozaitis, Lynn Freitag, Susan Eby, and Connie Klutnick.

All I can do is thank all who participated and everyone who is supporting my telling of the lost story of our Lithuanian-American families in Springfield and central Illinois. Please spread our history by spreading the word about my book, which can be purchased at Noonan’s Hardware on North Grand Ave. East, as well as on Amazon and in the CreateSpace E-store  https://www.createspace.com/5493567

One of the best parts of my “big book tour week” was not having to leave town. I am finding so much interest and support right here in Springfield, where the stories I have told matter the most, and probably always will. (However, I am also working to place a copy of the book in the collections of Vytautas Magnus University in Kaunas, and I have heard that other copies have been mailed to Lithuania, as well.)

3 thoughts on “From Lithuania to the Land of Lincoln”