I believe this is the wedding of Anna Klimaitis and Peter Bernotas, 1916.

Peter (Petras) Bernotas, the son of Casimir (Kazimieras) Bernotas and Agatha Tisckos, was born in 1878 in Vilnius, Lithuania. He first immigrated to Chicago, where he became a naturalized U.S. citizen in 1905. At age 38 in 1916, Peter married 16-year-old Anna Klimaitis (Claimaitis?), daughter of Vincent (Vincas) and Anna (Ona) Matuliczuite (Matulis?) Klimaitis of Naumiestis, Lithuania. Matulis-Klimaitis daughters Anna (born 1900), Adella (born 1902), and Mary had all been born in the coalfield county of Lanark, Scotland, where their miner father and mother had immigrated after marrying in 1898 in Władysławowo, Poland. 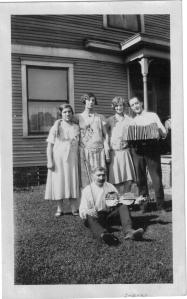 Coal miner Vincent Klimaitis preceded his family to central Illinois, and wife Anna and their three daughters followed him to the U.S. on the Anchor Line ship SS California out of Greenwich, Scotland in 1913. Given the age difference between Peter Bernotas and his young bride Anna, I wonder if maybe Anna’s father Vincent was a coal-field acquaintance of Peter and made the introduction. 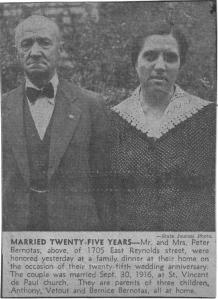 Two things are notable about this series of photos: first, the aging affects of coal mining and perhaps, related illnesses. You can see Peter Bernotas at 38 in his wedding photo, in his early 40s as the seated fiddler, at age 63 in his 25th wedding anniversary news clipping, and finally, at 68, and likely seriously ill, in his naturalization certificate photo. (From her 25th anniversary photo at age 41, one can also tell that being a miner’s wife has not been easy on Anna Klimaitis Bernotas). Peter’s naturalization certificate, itself, is interesting in that it appears to have been secured in his last days, 41 years after U.S. citizenship was legally granted. Maybe he wanted to have this precious document before he died, to pass down to his children? One can also tell from his signature that handwriting, and literacy, were likely achieved after he was an adult, as was the case with so many Lithuanian coal miners and their wives. After Peter Bernotas and Anna Klimaitis married in 1916 and went to live at 1705 E. Reynolds St., they had three children: Anthony Peter, born in 1917, Vetout (Vytautas), born in 1923, and Bernice (Bernotas) Stevens. The family attended St. Vincent de Paul Lithuanian Catholic Church, where Bernice appears in several photos.

The church choir with names, from 1956 Jubilee book.

Anthony Peter and Vetout Bernotas, circa 1940

All three of the Klimaitis-Bernotas offspring appear to have served in World War II: Anthony Peter as a U.S. Army corporal, Vetout in the U.S. Air Force, and Bernice as a Navy “Wave.” (Bernice later moved to California.)

Anthony married Dorothy Jane Hall and the couple had children Terrence Michael, Susan Marie, Denise Anne, and Stephen Anthony, who affectionately called their Grandma Anna “Nano.” After living at Nano’s on E. Reynolds for a time, Anthony and his wife Dorothy built their own home at 2437 E. Keys, in Grandview. He worked as a machinist at FiatAllis. The family attended St. Cabrini Church. 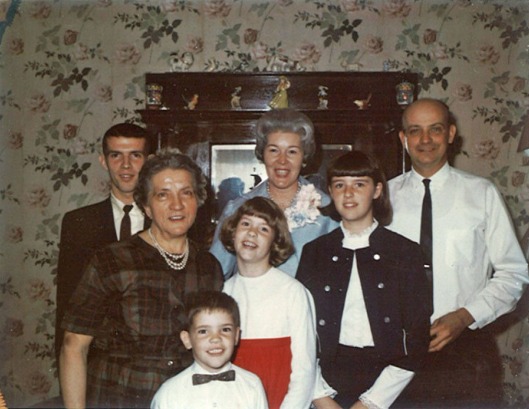 A few interesting facts about the Klimaitis-Bernotas clan: 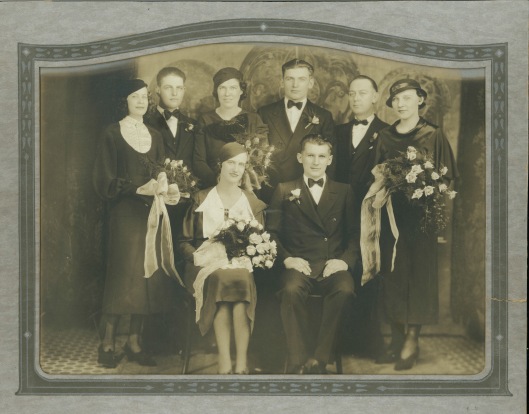 In 1933 Adella, the sister of Anna (Klimaitis) Bernotas, married Michael Makarauskas, older brother of Springfield McDonald’s restaurant founder John Makarauskas. Michael of Smilga, Lithuania, sailed from the Latvian port of Liepāja in 1922 with his mother and younger brother, John, on the vessel Estonia. That was the year they were finally reunited with their father, who had immigrated to Springfield just before the outbreak of World War I, which ended up dividing the family for almost a decade.

Adella and Michael Makarauskas’s 1933 marriage was ill-fated. Michael was killed in a railroad accident in 1936 or 1937. Records show Adella married again in 1938 to William J. Laukaitis (parents Joseph and Valeria Galinis Laukaitis), of Cherry, Illinois. William was a veteran of World War II and Korea. However, Adella and William divorced in 1943, and Adella was subsequently married for a third time, to Marshall Dirksen.

5 thoughts on “The Bernotas Family in Photos”