Founded by Joe (Sr.) and William Chepulis, Champion Garage at 820 E. Black Street celebrated 50 years in the auto body and auto repair business in 1986. Back in 1936, cars were heavy, metal-plated tanks compared with today’s alloy and plastic-bodied vehicles. They were also mechanically simple compared with today’s mechanical-electrical-digital wonders.

Remember chrome bumpers? Now, those were not just crash, but demolition derby-worthy. Remember when cars had faces, with headlights for eyes and grilles like grins?

Champion saw it all, over the years, while providing a livelihood for Joe and Bill’s families. One of the most interesting photos of the business, to me, includes Champion’s tow-truck from a simpler time, with home-made lettering on the door.

Joe, Bill and Mary Ann were the children of Lithuanian immigrants Carl (Karalius) and Mary Eva (Lelesius) Chepulis. Carl was a coal miner born in 1884 in the Marijampole area. Also born in 1884, Mary Eva came to the U.S. when she was 18 with a cousin name Kurila.Carl and Mary Eva married in 1908 at St. Vincent de Paul Lithuanian Catholic Church.Their first child was born in 1909. The family lived on North 15 St. for many years, across the street from the Sluzalis home.

Both Joe and Bill ended up working in the area’s coal mines, at first to take their father Carl’s place on days when he couldn’t work. (Carl suffered for years from black lung disease, and died of it at age 66.) Joe and Bill later took up auto body work at Gietl Brothers Garage on Second St. near the Capitol. They learned the trade and opened their own garage, Champion, in the heart of the Great Depression in 1936.

Here are a few comments that have already been made about Champion and its founders:
— “I worked at Marine Bank for years re-posessing cars, and Joe was our tow truck driver. He could hook and snatch the car before people even knew what happened to them!”
— “I remember Joe, Jr. and his family from my many visits to the shop as an auto claims rep long ago. Stepping into their shop was like a step back in time…Joe Sr. and Mrs. Chepulis were very kind. I remember Joey and his mom running the place after his dad died…”

Families back then had to pull together just to make it, and that may explain why Joe, Sr. didn’t marry and leave home until he was 35, Mary Ann until she was 40 and Bill until he was 50. Joe, Sr.’s daughter Mary also recalls: “Dad had an Indian Motorcycle, a really famous brand. If anyone had one today, it would be worth a fortune. However, he was a bit of a daredevil and he had an accident with it, had to go to the hospital, and while he was in the hospital, his mother sold it.” 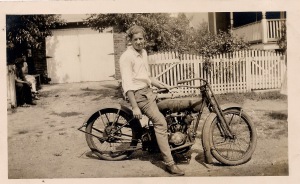 Additionally, Mary remembers visiting Grandparents Carl and Mary Eva after they moved to North Peoria Road, just east of old Gate 3 of the Illinois State Fairgrounds. Mary recalls, “I’d go over there and she’d braid my hair, pulling the two braids together at the back of my head and tying them together with a ribbon. They had chickens and a cow, and every once in a while, the cow would have a calf. I remember having to walk home to our house on North 15th Street though cow fields.

“I also remember that we parked cars at Grandma’s during the Fair: Cars were 50 cents for the day, motorcycles, a quarter. I was so impressed as a kid when my Uncle Bill built a stand to sell sodas.” 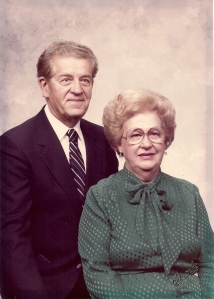 Joe Chepulis, Sr. married Sylvia Petrokas at St. Vincent de Paul’s, where they had met. Sylvia was the daughter of coal-mining Lithuanian immigrant Stanley W. Petrokas, who was the son of Ignatius and Barbara (Gestaut) Petrokas. Sylvia’s mother was Catherine Rice (Rieskevicius), who was the daughter of Adam and Anna (Senkos) Rieskevicius. Catherine died in 1924 at the age of 25, leaving Stanley with two daughters, Sylvia and Ruth Petrokas (Lustig), whom he raised by himself.

In addition to daughter Mary, Joe, Sr. and Sylvia had four other children, who all attended St. Aloysius Grade School: Joe, Jr., who took over the garage when his dad became ill in 1987; John, an electrician; Bernadine, who studied music at the American Conservatory of Music in Chicago; and Patricia, who retired from the state and also earned a nursing degree. All the girls attended Ursuline Academy. 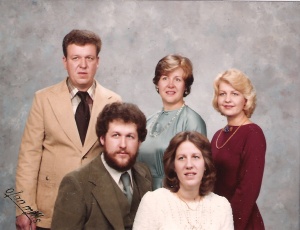 As for Champion Garage, Mary’s brother Joe, Jr. operated it until about 2006, and then began renting it out to another auto body operator.

8 thoughts on “The Chepulises and Champion Garage”