Stanley & Agota (Agnes) Baltramiejunaite Makarauskas and her uncle. Front row l to r: Sons Michael and John Makarauskas, 1922, the day Agnes & her two children immigrated and were reunited with Stanley, who arrived in the U.S. in 1914.

Thousands of local youth–boys, only, at first–earned their first paycheck at one of Springfield’s first 8 McDonald’s restaurants opened by the Makarauskas (Mack) family starting in 1957. Previously, I posted all the Mack “McHistory” that I could find in public records. This week, we benefit from the memories and photos of Jim Mack, Mary Ann (Mack) Butts, and Dorothy Makarauskas.

It’s hard to overestimate the impact of Springfield’s first fast food on local eating habits and teen employment and culture. Through the 1970s, despite paying only minimum wage, the McDonald’s on S. MacArthur Blvd. (opened in 1961) was not only THE place to work. It became such a popular teen and “hippie” hangout that the packed parking lot required its own bouncer. Hot rods cruised around the restaurant and up and down MacArthur a la “American Graffiti” every Friday and Saturday night.

Who brought the future as we know it to Springfield? John Mack (Makarauskas), Sr., a Lithuanian immigrant who arrived in Springfield in 1922 at age 10 with his mother Agnes and brother Michael– speaking no English. John earned only a sixth-grade education before, like so many other immigrant boys, he had to follow his father Stanley and older brother Michael Makarauskas into our local coal mines at age 14. (Stanley had immigrated first, to the Pennsylvania coal fields, in 1914.)

Many miners now gone considered John Mack a hero because of the way he supported the Progressive Miners of America by “carrying” his striking brethren on credit at a grocery store or informal, home-based “commissary” during the deepest trough of the Great Depression, when he and thousands of other miners were thrown out of work by the Central Illinois “Mine Wars” (as reported on page 92 of the book Divided Kingdom). However, the first John Mack grocery store remembered by Dorothy Makarauskas, wife of John’s much younger brother Frank, operated from 1941-43 on 1st St. just south of Laurel. John closed the 1st St. store and opened a larger store at 1501 Keys Ave. in 1943.

Dorothy remembers that the Keys Ave. store, which sold meat, bread, milk and dry goods, was Springfield’s first “self-serve” corner grocery where customers picked up their own items and brought them to checkout clerk Frances Trello. (At other corner groceries of the time, the staff would move about the store filling customers’ orders.) 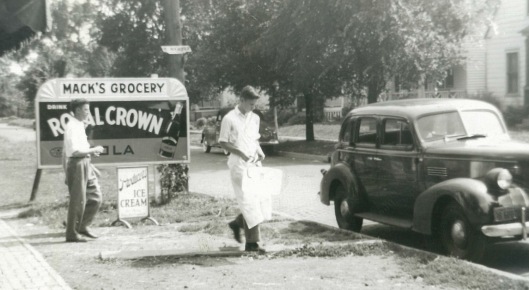 John’s younger brother Frank Makarauskas, 18, carries a block of ice from the S. 1st St. store to a customer’s car. 1943

John’s son Jim Mack remembers the financial squeeze his father faced as he continued to broadly extend store credit well into the 1950s, worsened by the arrival of the first supermarket chains that began eating the independent grocers’ lunch. Then one day McDonald’s founder Ray Kroc entered the picture.

Jim was living on S. 6th with parents John, Sr. and Mary (Gidus) Mack, brothers Tom and John, Jr. and sisters JoAnn and Mary Ann when he says Kroc drove by the main gate of the huge Allis Chalmers construction machinery factory across the street. That’s when Kroc approached John Mack, Sr., simply because he considered the real estate across from Allis Chalmers the perfect site for Springfield’s first McDonald’s restaurant (the nation’s 69th). It was serendipity that John, Sr. was a butcher able to provide ground beef, but struggling to survive in the dying corner-grocery business. It was also the opportunity that John, Sr. had been waiting for all his life.

He accepted Kroc’s proposal to replace the site of the family’s home with a McDonald’s drive-up restaurant. But, first, he had to borrow $100,000—akin to borrowing almost a million dollars today—in order to clear the site, move his family’s home around the corner, build the restaurant and parking lot, and pay his franchise fee.

Recalls daughter Mary Ann (Mack) Butts: “Mary, our mother, was in the meetings with him when he went to the banks. They literally laughed at him and said,‘You have a 6th-grade education and you want to open a restaurant?’ Mother said it was embarrassing and she really felt bad for him. The banks also said, ‘Who would want to buy a 15-cent hamburger?’ They thought it was ridiculous because that was kind of expensive back then.” 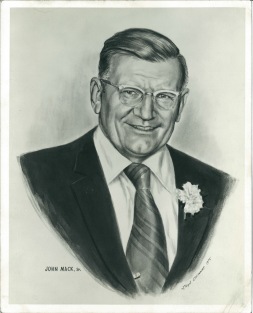 1975 artist’s rendering of John Mack, Sr. photo to be placed inside his McDonald’s restaurants in memoriam

John, Sr. didn’t give up. Illinois National Bank finally agreed to make the loan, and out of loyalty, Mary Ann recalls, the Macks continued to do their McDonald’s financing through INB even after John, Sr. died in 1974 at age 61.

Coming Next Week: Chapter III of Springfield’s Mack “McHistory” will reveal how the first McDonald’s burgers and fries were produced, tell the story behind our local Ronald McDonald House, and share the names of a few famous Springfieldians who once sold Big Macs.