Springfield nurse Debbie Ritter is half-Welsh on her father’s side and half-Lithuanian on her mother’s. In fact, she is a descendant of maternal grandparents who were both Lithuanian, whose own parents (Debbie’s great-grandparents) were all born in Lithuania.

A proud “Northender,” Debbie attended St. Aloysius Grade School and Ursuline Academy. She earned her associate’s of science in nursing from Lincoln Land Community College and worked as a oncology certified nurse for a medical group in Springfield for 15 years. Today she is a nurse at Springfield Clinic, and has two sons: Dalton and Noah.

Debbie’s maternal grandmother was Anne Petreikis Urban. Her parents were were Barbara Krauskis (Krasauskis) and Anthony Petreikis, both born in Lithuania. (Barbara was born in Taurage.)

Debbie’s maternal grandfather was William Urban (Jr.). His parents were Barbara Paris and William Urban (Sr.). Mary was eight years old when she immigrated from Lithuania with her parents around the turn of the Twentieth Century. Bill Sr. came when he was older, to avoid the military draft and World War I. He was born in Kaunas. Both of Debbie’s maternal great-grandfathers worked in our local coal mines. 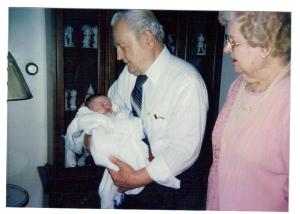 Debbie remembers many happy family times around the table at her grandmother Anne (Petreikis) and grandfather Bill Urban’s house on E. Moffat Street. She also remembers her three maternal great aunts and uncle.