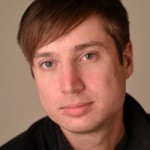 Matt Buedel, who grew up in Springfield the son of Regina (Abramikas) Buedel and grandson of Lithuanian immigrants Walter and Stephanie Abramikas, is a police beat reporter for the Journal Star newspaper in Peoria, Ill. He has worked at the Journal-Star for 13 years. Lately, he observes, “I’ve ended up reporting almost as much about the local police as about criminals.” The rest of this blog profile is Matt, the professional (and professionally sardonic) writer, in his own words. Enjoy!

When he was 16, Matt’s parents slapped a license plate on his car that read “BUEDEL 4” so that other drivers in Springfield could notify them when he did something dumb. The strategy never worked, but the license plate stuck around for about 18 years.

Alas, Matt’s lovely wife, Clare, fearing for her husband’s safety after he authored some particularly pointed newspaper stories, recently convinced him to abandon his vanity plate. Hence, he will drive in relative anonymity to the annual meeting of the Peoria Chapter of the American Civil Liberties Union later this month, where he will receive an award for his police reporting.

License plate cajoling aside, Matt lives a life of domestic bliss. He and Clare are about to celebrate their first anniversary (a number skewed by years of procrastination in engagement). Clare was smart enough to escape journalism (unlike Matt, who holds a journalism degree from Bradley University) and return to school for another degree. She now works at a Peoria ad agency, where people have more fun.

Their daughter, Felicity, is 9 years old (and won her first argument with her father more than five years ago). Felicity claims she will never drive a car and will attend Bradley University, as much for family tradition as convenience: The campus is just down the street from their house in Peoria’s oldest neighborhood.

Besides marital bliss, Matt has two other luxuries in his life. He takes an unusual amount of solace in pointing cameras at things and pressing buttons. He once mistook this as a professional calling, but after a healthy dose of commercial work, decided not to send photography down the path his poetry once took: to a full-time job.

That he no longer writes for himself, however, is not a problem because of his second luxury, which can prove elusive depending on the day: Each morning, Matt leaves his house in search of the truth.

For the record, let me add that Matt attended St. Agnes Grade School and Sacred Heart Griffin High School. Also, after reading the above, Matt’s mom, Regina, notes that in addition to writing about the disappearance of a man with Alzheimer’s, Matt actually joined in the search and found the man’s body before search and rescue. The grateful family, about whom Matt had written so sensitively, mentioned Matt’s name in the victim’s obituary. And, both Matt and the victim’s son, Scott Garrett, subsequently became certified members of the Peoria County Search and Rescue Squad. Be sure to read all the comments at the end of the article at this link:
http://www.pjstar.com/news/x1134100794/Peoria-Co-man-found-dead-one-week-after-being-declared-missing